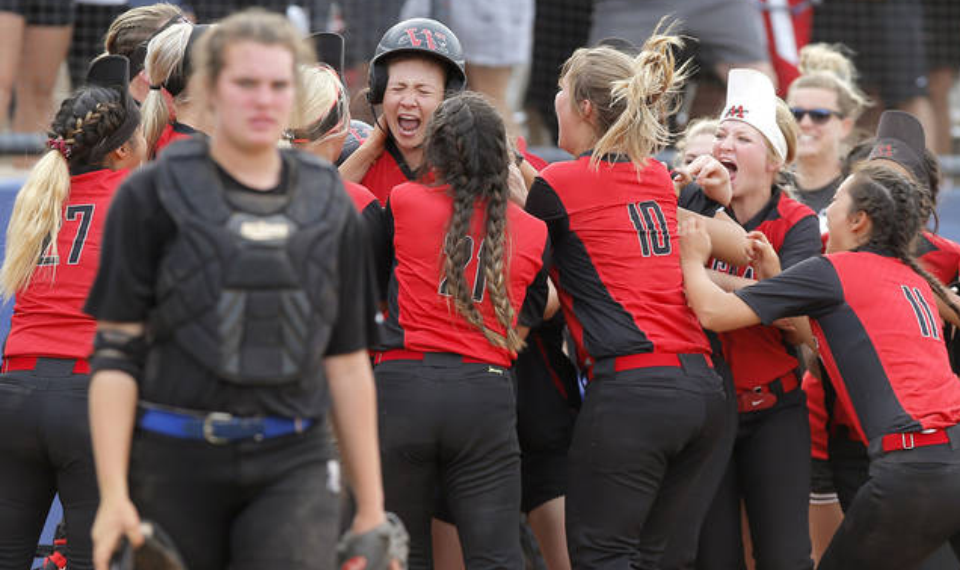 A game full of crazy offensive explosions, errors and comebacks lacked only a little bit of luck.

The senior's fly ball to open the bottom of the seventh in a tie game appeared to be an out at the base of ASA Hall of Fame Complex's wall.

The ball bounced off Choctaw outfielder Lainee Brown's glove and beyond the fence, setting off a celebration the Jaguars hoped would happen the past six years.

No. 4-ranked Westmoore beat No. 7 Choctaw 23-22 to win the Class 6A slowpitch softball state championship Tuesday night in the wildest of ways in a wild game.

“It was so exciting," Strickland said. "It's just something you can't top.”

The state title is Westmoore's 11th in slowpitch softball, but first since 2012. The Jaguars have won them in bunches, winning three straight twice.

“It's about time,” Westmoore coach Steve Schwarz said. “Let's start another run, shall we?”

Entering this tournament, Schwarz believed his team was the best offensively. After scoring 20 or more runs in all three state tournament games, it's tough to argue.

“It just shows you if you give it your all like these kids did that's what's going to happen,” Schwarz said.

Westmoore (23-6) hit four home runs, including a three-run shot by Josie Tofpi in the sixth that appeared to put the Jaguars in a comfortable spot. They took a 22-17 lead into the seventh.

But Choctaw, playing its first slowpitch season, rallied to tie the game on a two-run double by Tiffany Paul, who earlier hit one of Choctaw's four homers.

That only set up Strickland's dramatics.

“Very clutch, I'd say,” Tofpi said. “We needed that from her. She stepped up and did her part. It really helped us.”