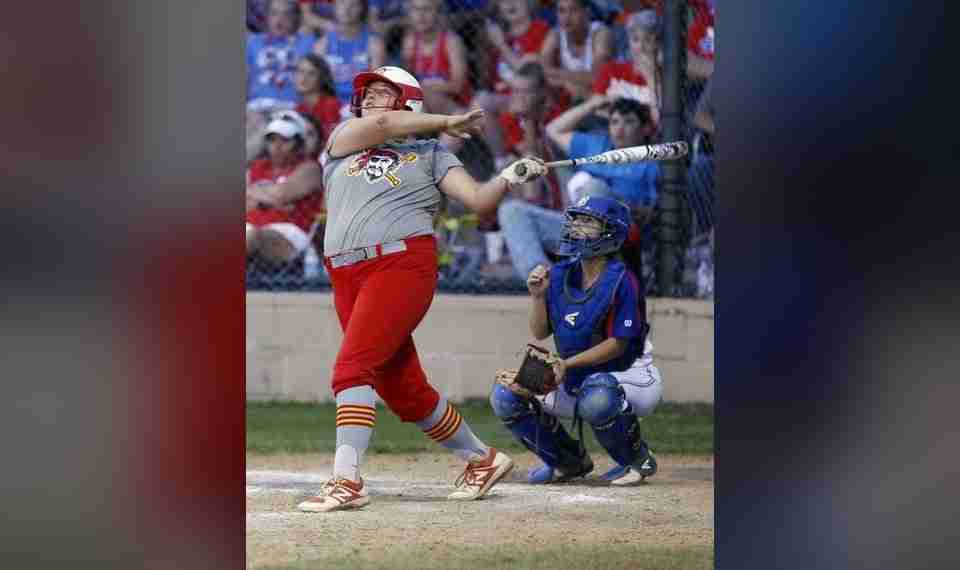 Dale's Delanie Manning hits a home run in the second inning of the Class 4A state high school slowpitch championship against Silo at the Ball Fields at FireLake in Shawnee on Monday. Dale scored 19 runs in a three-inning span to win the title. [Nate Billings/The Oklahoman]

SHAWNEE -- The Dale girls slow pitch team sprinted out of the dugout straight at coach Andy Powell. Each player held a can of silly string in her hand. They had prepared for this moment, the celebration of their state championship victory after beating Silo 19-4 in a three-inning Class 4A title game Monday at Firelake

“I thought for a second maybe they’re going to get the Gatorade,” Powell said, pulling neon silly string off his face, hat and shoulders. “And then I said, ‘well, there is no Gatorade over there,’ so I didn’t know what they were doing.”

Dale's power hitting put the game away early. Midway through the second inning, Dale third baseman Addie Bell was greeted at the plate by her teammates, two of whom she had just driven in with a home run that put the Lady Pirates up seven runs. Then Jobey Savage and Rylie Premo pegged solo homers to give Dale three straight shots over the fence.

Later in the inning, Delanie Manning kept the trend going for the Lady Pirates, mashing a ball over the left field fence for a two-run homer. Dale took a 16-2 lead heading into the third inning.

Broken Bow beat Southmoore 19-6 in the 6A championship game.

“We knew coming into the finals, we were going to be behind the eight ball the whole time,” Southmoore coach Jason Lingo said. “We knew it was going to be an uphill fight. We’ve watched Broken Bow swing the stick all year long, and they are tremendous.”

On the second pitch of the game, Broken Bow’s Shelby Sharrock drove a home run over the left field fence. Janyrie Ganaway went yard two batters later. But Southmoore would hold Broken Bow, which scored 27 runs in its semifinal victory over Moore, to just two runs in the first inning.

Broken Bow scored at least four runs in the third, sixth and seventh innings on its way to a commanding victory.

Kellyville hit six home runs in the fifth inning to end the 5A title game early, with an 18-5 victory over Sequoyah Tahlequah. Kellyville leadoff hitter Madison Neighbors led the way with a home run in each of her three at bats.

Four of Sequoyah’s five runs came in the first inning, thanks to back-to-back home runs by Haylee Tackett and Lana Gass.