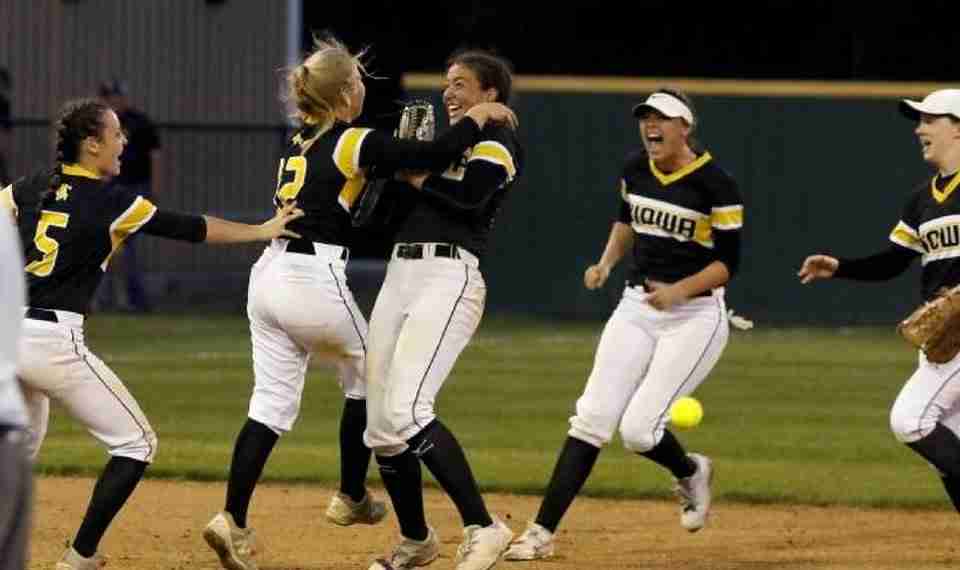 SHAWNEE — A pop fly to center field was quickly followed by a dogpile of yellow and black-striped jerseys just to the left of second base.

The Kiowa Cowgirls know how to celebrate at The Ball Fields at Firelake.

Seven months after claiming the Class B fastpitch state title, the same Kiowa team was back in Shawnee on Tuesday night for another set of rings.

Kiowa turned the Class A slowpitch softball state championship game into a home run derby as it crushed Varnum, 31-7.

The rout began with a 16-run first inning for the Cowgirls. On one home run, the Varnum left fielder stood under the scoreboard and didn’t dare look up as another ball sailed over the fence.

“It was our best first inning, absolutely,” Kiowa coach Keith Quaid said. “It might’ve been our best three innings combined. Everybody one through 10 hit the ball well. We’ve just been talking about that all season long, putting a complete game together. We put one together when it mattered most.”

Kiowa didn’t play a full seven-inning game throughout the playoffs in its run-rule march to the state title.

Kiowa had never won an OSSAA state championship before last fall’s fastpitch title. The town in Southeastern Oklahoma hardly had to wait for another trophy.

“It’s hard to put into words,” Quaid said. “It’s just unbelievable. We’ve waited so long to have this success, and to see those smiles on those kids’ faces, it’s unbelievable.”

The students from Navajo didn’t sit down the whole night.

The Lady Indians recorded that final out to beat Amber-Pocasset 14-6 in the Class 3A slowpitch state championship.

Navajo led from the start when it scored seven runs in the opening frame.

The other fields had long cleared out while cowbells still clanged in a back-and-forth game between Binger-Oney and Shattuck.  The Lady Bobcats held off Shattuck 25-20 to win the Class 2A slowpitch softball state championship.